At the end of the holidays, I borrowed 3 movies - 2 dramas, and a comedy.  Unfortunately, it wasn’t a very funny comedy.

Starring Ben Stiller, it was billed as his best work or something.  Romantic comedy and all that.  It had a few funny bits, some insightful comments, but... About three quarters of the way through, I was thinking this has gone on long enough.  Thankfully my mum called, we had a nice long chat, and then I had to get back into it.

My main problem with this movie (apart from its inordinate length) was the unexplained attraction between Roger (Ben Stiller) and Florence (Greta Gerwig).  He’s an obnoxious twat still living in the past, and she’s 15 years younger than him and still trying to work out what her life is to be.  The only thing I can work out is that she’s attracted to his wounded older man persona, and (to be blunt) he’s attracted to her boobs.  And her eagerness to be with him.

There were some interesting ‘former shrink’ comments, but mostly I felt like I lived on a different planet.  Not that this is an unusual feeling for me, but it was even more pronounced watching this movie.

More interesting (but still, not comedy) was the interaction between Roger and his former friends.  They’d been in a band, and Roger had dreamed bigger than the rest... which had caused a lost opportunity and a whole lot of bitterness between the friends.  Not really friends anymore.  The rest of them have done the 'grown up' things, getting married and having kids.  Roger comes back (from years in New York) and expects everyone else to be where they were so many years ago.  The sentence that really struck me was from his closest friend Ivan (Rhys Ifans - yes, all I could see was him waving to the paparazzi  in off-coloured Y-fronts): It’s huge, to finally embrace the life you’ve never planned on.

And this is something that has been on my mind a lot lately.  This statement has remained with me.  For everything else though - thumbs down. 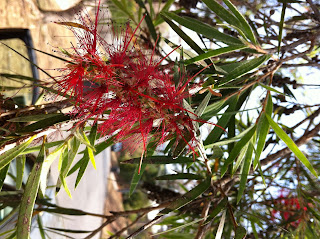 A bit blah.  The bottlebrushes have been enjoyed by the local parrots, leaving far less bushy flowers behind.
Posted by annabananna at 21:16

annabananna
I'm a violinist, and I enjoy creative pursuits - photography, making jewelry, card-making, painting, and I try to make a new recipe each week.